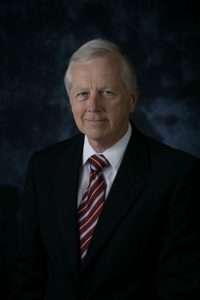 When Indiana’s Governor, Eric Holcomb, took office in January of 2017, one of his top priorities was battling the state’s opioid epidemic. In fact, given that Indiana deaths caused by opioids have risen 271% from 2010 to 2016, this was one of five pillars of Holcomb’s governing agenda. In pursuit of this mission, the Governor’s first step was appointing Jim McClelland as the inaugural Executive Director for Drug Prevention, Treatment, and Enforcement for the State of Indiana. This new cabinet position reports directly to the Governor and coordinates, aligns, and focuses the efforts of nine state agencies in response to the opioid epidemic. McClelland also chairs the Indiana Commission to Combat Drug Abuse.

Months after beginning his reign as Indiana’s drug czar, McClelland presented the Governor with a strategic approach that recognizes substance use disorder as a chronic disease and places a high priority on battling the stigma around addiction. Among other strategies, McClelland has stated that his team will give preference to evidence-based programs and practices, while leaving room for promising innovative approaches.

McClelland’s approach to opioid addiction is consistent with CleanSlate’s guiding philosophy. CleanSlate is a national medical group which utilizes office-based, outpatient addiction medicine to treat thousands of patients across the country – including seven centers in Indiana. We’re honored that Mr. McClelland will be speaking at the official ribbon cutting ceremony for one of our new Indiana centers, at 9660 E. Washington Street in Indianapolis, on Friday, April 13th.

A little more than one year since McClelland began, he’s supported or facilitated numerous initiatives to combat the state’s opioid crisis, many of which dovetail with the services of CleanSlate. One of McClelland’s key action steps is to greatly improve access to effective, affordable treatment, with a preference for medication-assisted treatment (MAT). This includes a commitment to increase the number of Indiana Family and Social Services Administration (FSSA)-approved opioid treatment locations so Hoosiers have better access to treatment.

Indiana received $10.9M in funding from the Substance Abuse and Mental Health Services Administration (SAMHSA) through the 21st Century Cures Act to support Indiana’s fight against its opioid epidemic. This allowed Indiana to launch a program called Project ECHO  –  Extension for Community Healthcare Outcomes  – to fulfill a required goal from SAMHSA: expanding education for providers in opioid use disorder (OUD) and medication assisted treatment (MAT). Project Echo’s objective is to increase MAT training and increase the number of providers who are trained in OUD prevention and treatment.

Recently, Senate Enrolled Act 243 establishes a pilot project to pay for OB/GYN doctors to be trained in prescribing drugs such as buprenorphine for medication-assisted treatment. Senate Enrolled Act 446 sets up a pilot project to provide opioid treatment to pregnant women and mothers of newborns at three locations in Indiana, including Indianapolis. CleanSlate places a priority on treating pregnant women suffering from opioid addiction, and we fast-track pregnant patients through any obstacles so that they and their unborn children get treated immediately.

The barriers to treatment start with the stigma around addiction. CleanSlate applauds Indiana’s Know the O Facts campaign which seeks to dispel the myths around addiction, led by three key messages: 1) Opioid use disorder is a disease; 2) There is treatment; and 3) Recovery is possible.

The language suggestions offered on Indiana’s NextLevel Recovery website pages are helpful educational tools to speak about the epidemic: The Know the O Facts campaign encourages people to take a pledge to help build awareness and understanding about opioid-use disorder. The goal is to end stigma and let healing begin.

With seven outpatient medication treatment centers in Indiana, we at CleanSlate look forward to supporting Mr. McClelland’s leadership and working closely with partners throughout Indiana’s care continuum to save lives and give patients hope for the future. If you’d like to find out more about CleanSlate’s drug rehab work in Indiana, please attend our open house event on Feb. 13th, or visit us at www.cleanslatecenters.com. To schedule an appointment, call us at 833-505-4673. The Facts About Medication-Assisted Treatment For Opioid Addiction