Co-Occurring Disorders: The Link Between Addiction and Mental Health 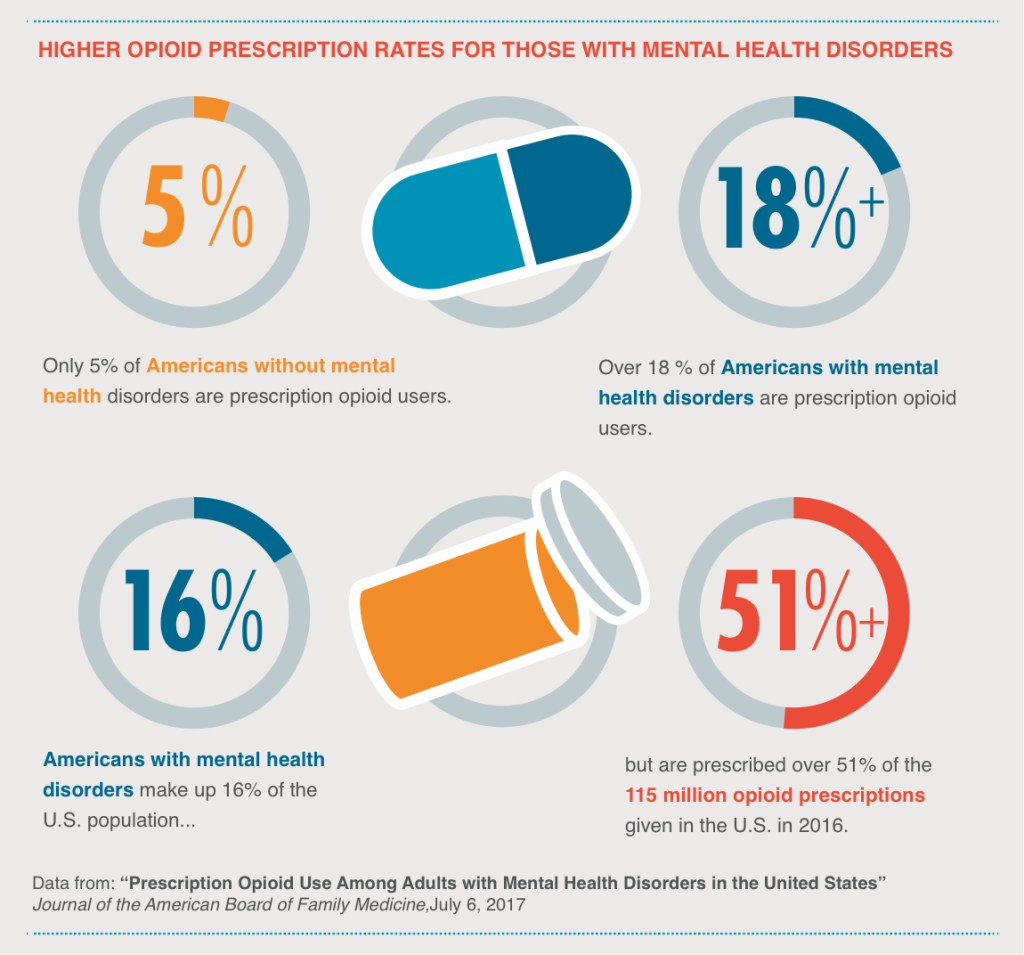 Those of us who work in the field of addiction, or suffer from addiction ourselves, know the stigma that surrounds this illness.

There’s another disorder so laden with stigma that treatment is often roadblocked: mental illness. According to the National Alliance on Mental Illness (NAMI), one in 5 Americans (43.8 million) experiences mental illness, and nearly 1 in 25 (10 million) adults in America live with a serious mental illness that substantially interferes with or limits one or more major life activities. As with addiction, the barrier of shame, fear and silence prevent far too many people from seeking help.

And often, addiction and mental illness are connected. This only compounds the stigma that makes treatment for both disorders difficult to access.

A study last year by Dartmouth-Hitchcock Medical Center and the University of Michigan, published in Journal of the American Board of Family Medicine, showed that more than half of all opioids are distributed to adults with mental illness. Nearly 19% of the estimated 38.6 million people with the two most common mental health disorders – anxiety and depression – received at least two prescriptions for opioids during a year, with more than half of all opioid prescriptions going to individuals with these disorders. The researchers concluded that adults with mental health disorders are much more likely to use prescription opioids than people without mental health disorders  – 18.7 percent vs. 5 percent.

Other data from the National Bureau of Economic Research shows that people who have at any point been diagnosed with a mental health disorder are responsible for 69% of all alcohol consumption and 84% of all cocaine consumption. According to SAMHSA’s 2014 National Survey on Drug Use and Health, co-occurring disorders are highest among adults ages 26 to 49; for adults with serious mental illness and co-occurring substance use disorders, rates were highest among those ages 18 to 25.

Why is addiction so often linked with mental illness? Mental health and substance use disorders both occur because of environmental and biological factors. Unfortunately, the two issues can easily become entwined and exacerbate each disorder. People often seek relief from mental illness symptoms through drugs and alcohol, which can then compound or create mental health disorders, such as when a drug induces paranoia, depression, or panic disorder. There is great variability and severity amongst co-occurring disorders, and when the disorders are combined they can mask one another and make diagnosis and treatment more difficult.

When co-occurring disorders exist, treatment for both addiction and mental illness is necessary to address the underlying causes and symptoms of each. SAMHSA recommends an integrated approach that coordinates substance use and mental illness interventions. Treatment is possible for both disorders, but without addressing each disorder as a distinct condition, the intertwined problems with one or both illnesses may persist.

Every year, NAMI and other organizations observe May is Mental Health Month to call attention to the prevalence of mental illness and the importance of getting treatment. This year, NAMI’s theme for all awareness events throughout 2018 is “CureStigma,” which positions public perception surrounding mental health disorders as a disease in its own right.

“There’s a virus spreading across America,” states NAMI. “It’s stigma against people with mental health conditions. But there’s good news. Stigma is 100% curable. Compassion, empathy and understanding are the antidote.”

Separately, the stigma against people suffering from addiction must also be challenged so that treatment  – including medication treatment for addiction – can be more easily accessed by patients.

As a part of its mental health education campaign, NAMI is encouraging communities to help spread awareness of how prevalent mental illness actually is and how it affects different groups of people: Helping, and getting help Millions of people live with the daily reality of mental illness and co-occurring disorders. Treatment and recovery is never a “one-size fits all” journey, and SAMHSA recommends a comprehensive assessment as a first step to inform an integrated treatment plan for anyone suffering from a co-occurring disorder. Early detection and treatment are linked to better outcomes and quality of life, so experts advise people to seek medical treatment for both disorders as soon as possible.

Above all, do your part to cure the stigma surrounding mental illness and addiction so that people who suffer from either or both disorders are more likely to seek help. Offer acceptance instead of judgment, just as you would with those suffering from a different illness. Help those in need find medical treatment and other forms of support for their disorder. And check your own attitudes: if you think you may be infected by stigma, click here to take this quiz from NAMI, and get a free gift to help spread the cure.

CleanSlate treats patients suffering from addiction with medication and a continuum of care that addresses the full scope of their recovery. We work closely with community partners – including behavioral and mental health experts – to approach every patient as an individual, creating a tailored treatment plan for each patient. If you or someone you know suffers from a co-occurring disorder, contact us at 833-505-4673 or visit our website at www.cleanslatecenters.com Maria Russo-Appel, M.D. is a board-certified adult psychiatrist and the Eastern Division Medical Director for CleanSlate, a leading national medical group that provides office-based outpatient medication treatment for the chronic disease of addiction, primarily alcohol and opioid use disorders.